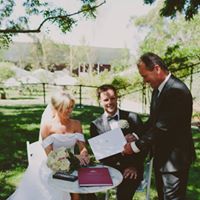 Brian is responsible for ensuring that you are validly married and that your marriage is registered.  Statutory documentation must be completed to solemnise your marriage (Click and browse).

The NOIM is the definitive application form required under Australian Law to be married.  This form is completed with the marriage celebrant no more than 18 months and no less than 1 month and 1 day prior to the wedding. Under Australian law, to authenticate your Notice of Intended Marriage, you are required to provide evidence of date and place of birth AND evidence to establish the identity of the parties to the marriage which may include……

This Happily Before & Ever After brochure is a requirement of the Australian Marriage Act 1961, found under section 42 (5A). Couples are required to read this in order to better understand some of the obligations and expectations of the modern marriage.

Call now for an obligation free quote for Brian Boadle